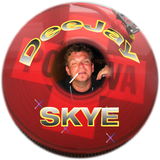 Join my Twitch for live. http://twitch.tv/deejayskye

Career started 1985 in a youth club.
Got professional when the mandatory military service was done 1991.
Worked for a agency called Diroco and with Ema Telstar to 1996.
Became Resident Dj at a Club in Borås worked there 4 nights a week to 2001. Then several club jobs in Gothenburg city to 2008 during weekends when I had another job as traindriver.

Started with vinyl and converted to CD 1993-94 when the first deck with mixing arrived. Played CD's to 2008 but also started to convert to Mp3 around millenium to save harddrive space and a flashdrive is a way more lighter than a crate of CD's

Used computer to still be active with music and use software to produce mixes and got held of my first software controller late.
Bought it 2020 and it has be fun to do livemixes again.
Pioneer DDJ-RR seemed to be perfect for my business and virtual DJ as software