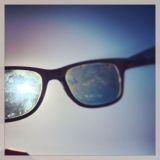 From April 2011 until August 2012 I hosted a radio program named "The Hip-Hop Food Pyramid" which aired every Wednesday afternoon on 89.9FM KBGA, the official radio station for the University of Montana located in beauitful Missoula. In 2011 I was voted the KBGA Rookie DJ of the Year. Since 2012 I have taken time away from DJing and have focused more attention towards blogging about songs! The Song Monster was created in Murcia, Spain in the winter of 2015.

Explore fresh new music by following the links below: