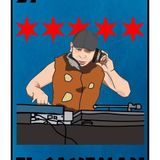 EL Caveman hails from Chicago….. the house capital of the world. This veteran has been part of the Chicago music scene for more than 20 years moving the crowd time and time again.
He co-produced some tracks on a few labels such as Minimalistix Records, S & S Records, Fresca Recordings, Azucar Distribution, etc. EL Caveman has produced several hot trax on Pica Stone Recordings and is charting! He continues to produce in the studio and is working on upcoming projects. EL Caveman also appeared in a cable show on CANTV spinning live in front thousands of viewers, along with a brief skit with Cajmere/Green Velvet. More and more people began to know of him.
Caveman continues to play at various prolific venues and festivals. What he plays can be described in two words: "HOUSE MUSIC". Nothing but the deep, nothing but the soul. He has amassed quite a following throughout the years. See more info: www.elcavemanmusic.com