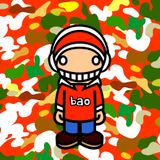 Support DJ BAO by subscribing directly to this channel and get access to exclusive rewards.

I have started DJ from 16, appeared at various stages; like famous clubs,like events in Yokohama Arena, Kawasaki Club Citta, and Yoyogi Park.My wide range of music and the MIX which perfectly fit to the mood are also highly valued.
Moreover, 2013 getstage sponsorship The premium event prior to the movie "Wilde speed EURO MISSION" Blu-ray&DVD release of the subject which recorded the universal work successive generation No.1 smashing success, DJMIX is estimated by the WILD DJ contest which can do DJ play in "Wilde Speed EURO NIGHT", and the highest award WINNER is won.
Official various mix CD released.
Even more performance is expected.