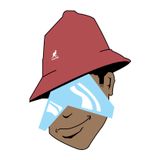 Never miss another
show from BLASTER B

Born and bred in Lausanne (Switzerland), Blaster B is a true pasionnate about Funk & Hip Hop music. From an early age, he started to spin records with a strong focus on the 80’s decade and embraced this era as a everyday lifestyle. His biggest influences include legendary DJs such as Grand Wizard Theodore or Grand Master Caz. Since 2010, he’s rocking the local clubs. He’s a former member of the Swiss crew/label KLH MUSIC which has worked with artist like Onyx, Xp or The Beatnuts and he is now an active member of The CHOSEN FEW Crew. Blaster B has an impressive track record, including gigs with big names such as Kurtis Blow, Shabazz The Disciple, Big Daddy Kane, Stretch Armstrong, Pharoahe Monch, Maylay Sparks and Egyptian Lover. He has been touring in several countries and capital cities such as France (Paris, Marseilles), Belgium (Brussels), USA (NYC), Canada (Montreal)or Germany (Berlin).