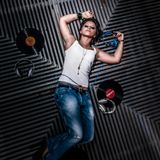 Never miss another
show from yayadeejay

Yaya Deejay, resolution and determination.
Coming from Trivento, near Campobasso, to Bologna, by adoption. Young, but proud of validation in the whole national area, she has been playing in different internationally famous events: 8th Vanishing Point Pagani Auto 2012, America’s Cup 2013, Abarth Trophy 2013, Wind Fresh Tour 2013, Sanremo 2014, DJ open act VASCO LIVE KOM 014, VENICE FILM FESTIVAL 2014
She is the official dj for Abarth events. She is one of the artists under Willy Marano Management.
Her first single "Drop the Bass" vs Hyenas Bro has climbed up toward highest ranking worldwide.
behind the consolle she is focused, she plays electro music and progressive house, but she also includes in the playlist past hits with an actual sound.