Whose the manager? - Ode to ARC background interview 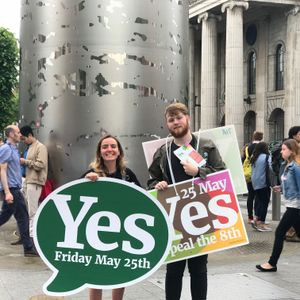 Whose the manager? - Ode to ARC background interviewby Workers Solidarity

This interview with Katie and Mary on the Repeal the 8th campaign was made to coincide with the release of the Ode to ARC video on International Women's Day 2019. You can view that video at https://youtu.be/9P_i5TgUiyA

Some of the topics discussed are;
The hidden importance of administration
So many people putting their lives on pause
The media pieces saying campaign would be lost
‘Helpful men’ & the media’s problem seeing women
The poster panic & the crowd fund
“Whose the manager”
The very noisy revolution
The influence of the 2002 referendum in the longer term
The caution of the movement of the 80s and 90s
“We never expected to get Repeal so quickly”
The relief of the exit polls
Recognising the foundations of the campaign - then women who didn’t back down
Contrasting movement building in 1992 and 2012
The North is Next
Women running for office V political parties capitalising on grassroots movements
People demanding change was the real strength