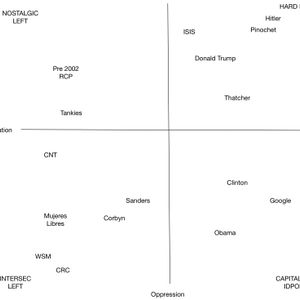 Discussions about Identity Politics (IdPol) absorbs a huge amount of energy across the political spectrum. Discussion on the left however is often complicated and made overly hostile because they take place along the single axis of oppression which means proponents of IdPol get lumped in with Hilary Clinton while opponents get lumped in with Donald Trump. This understandably encourages bad faith discussions that throw a lot of heat and very little light. Here we are going to argue that a much more useful exchange can happen when we instead create a plot where one axis is oppression and the second is exploitation as that puts both Trump & Clinton a good distance away from socialists.

A visualisation might help. The different positions on Capitalism and Identity Politics can be plotted two dimensionally where one axis is exploitation and the other oppression. See the graph at https://www.wsm.ie/c/identity-politics-four-way-conflict-left