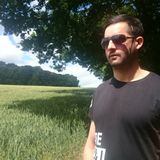 His passion, drive and obsession for music came at a very young age. Inspired by the tough underground scene, starting in his early teens, Warren Scott has taken Techno to the next level over the years incorporating Tech House, Minimal to the more chunky- funkier sound of Techno.

Richie Hawtin, Adam Beyer,Laurent Garnier and Jeff mills are his main influences to name a few.

Pushing the limits in his mid twenties, Warren invested time in his own studio where he began writing music- something he had always aspired to do.
In aid of this, he also passed a course on The Art of Modern Composition and Production.

The main spotlight for Warren stems from his ability to read the energy within the crowd, He also has his on show on Divine radio 95.1 fm also available on the Tune In App, which he does most Saturdays from 6pm till 8pm.

All mixes plus more can be downloaded on the soundcloud link below.