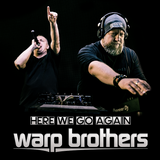 Rewind back to the year 2000 the birth hour of the Warp Brothers with their first release ‘Phatt Bass’. The tune catapulted the Warpies to the forefront of innovative Hard Trance/Trance music after the track smashed Top 10 sales & dance charts worldwide being associated to the epic opening soundtrack of the Hollywood blockbuster ‘Blade’. It not only became a club anthem but an iconic piece of music that’s still doing the business 20+ years later.

Despite the almost overnight success of “Phatt Bass”, the Warp Brothers were never destined to be a one hit wonder. Following it up with smash hits such as “We Will Survive”, “Blast The Speakers”, “Cokane”, “Going Insane” they reached top 10 in several countries including the UK and Germany, and being officially entitled to re-work Nirvana’s anthem “Smells Like Teen Spirit” they established their status being pioneers and legends of their genre!

Shortly after their incredible early success, the pair took the Warp Brothers sound around the