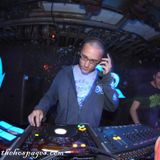 Never miss another
show from supergroover

Supergroover has been spotted for the first time in 2002, somewhere in the fields of the north of The Netherlands, but his existence remained a mystery ever since. Afterwards, his image has been
spotted by fanatics all over the world, but could have only been confirmed by psychotic hippies and redneck bus drivers in the surroundings of Mexico and Germany (were he has been seen at
Fullmoon & Fusion Festivals and more). Other wild tales go around in the likes of Guatemala, Bolivia, Belgium and Sweden. So it has been told that his image moves dance floors around the
world.
As a dj he is as versatile as needed (within traditional realms of psychedelia), but will refuse requests that don't go accompanied by $20 bills. So he plays anything from 128 to 140 kbps uh bpm, psychedelic techno to psytrance, but mostly active progressive in the same style that he produces.