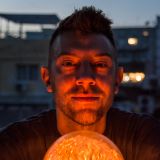 Never miss another
show from Stiko

Memories from another future mix
by Stiko

Dj/Producer from Athens (Gr), Stiko has a music ID that cannot be labeled! Having warmed up the stage for great artists like Nightmares on Wax, Quantic, Afrika Bambaataa, Νickodemus, Frenic and many more and at the same time non-stop producing his own music he made has already made his spot in Greek music map and looking forward to spread his taste all over the world. In addition to his solo career Stiko is also a part of ‘’the Four Twenty Kolektiv’’ , the 1/2 of Stiko & Wag project and member of the ‘’Antilopes’’ crew.