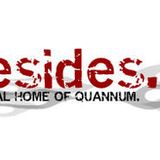 Never miss another
show from solesides

Solesides.com mixing the best of 2013 into 2014 (The Best Moment You Have Ever Known)
by solesides

Solesides is an underground hip hop label based in Northern California (Bay Area, Oakland, SF), founded in 1992. It comprised various DJs and MCs, the most notable being DJ Shadow, MC–producer Lyrics Born, Lateef The Truth Speaker, The Gift Of Gab and producer Chief Xcel. In 1996 the label won a "Goldie" award from the San Francisco Bay Guardian, being described as "Both a progressive crew of deejays and rappers and a fiercely independent artist-owned label...".

The label produced some of the most notable and memorable hip-hop music of the early 1990s including Blackalicious's "Melodica", Latyrx's "The Album" and DJ Shadow's "Entropy".

Solesides disbanded in the winter of 1996, and was reborn as Quannum Projects in spring of 1997.

www.solesides.com is here to keep the solesides name alive and to give the Quannum/DJ Shadow fans a home.