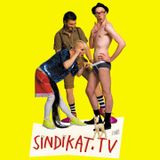 Never miss another
show from Sindikat

Although it has been shaking the parquets of the underground for a relatively short time, Sindikat has gained an almost cult following. Its direct and uncompromising events are expanding the horizons and setting new standards to Ljubljana’s clubbing scene. Sindikalist evenings flow between the crunchy popcorn of the past and noble eclecticism of the present, while occasionally slipping into the obscure mainstream and the sugary alternative. Every person in attendance is a significant factor in the overall appearance of the evenings and for a true Sindikalist, no appearance is too appalling, no move is too dramatic, no kitsch is too cheap and no trash is too dirty.