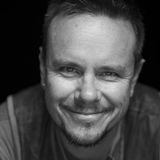 Simon Shackleton has an illustrious history in the music industry dating back 25 years when he left Exeter University with a Masters Degree in classical composition. He has played and recorded in bands such as The Headless Chickens with the likes of Thom Yorke (Radiohead), and got his start as a DJ alongside Felix Buxton (Basement Jaxx) during the early ‘90s acid house revolution. Since then he’s enjoyed a successful career under a number of guises including Elite Force, Lunatic Calm and Zodiac Cartel winning several prestigious awards along the way, most notably for his Revamped Series. His music has been featured in over 40 movies (including the original Matrix), dozens of TV shows and adverts, and a plethora of game soundtracks including Shockwave, which he co-wrote with the likes of multiple Oscar-winner Klaus Badelt (Pirates of the Caribbean).