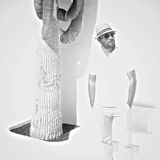 From Disco To Disco - could be described as the motto of Sash Moustache.

His passionate love for music was strong inspirated by the record collection of his father which offers a wide range of different styles of music from Pop, Funk, Soul & Disco to R’n’b and New Jack Swing.

Started as a bedroom DJ in the late 1990's he's arrived in his individual creative style, mixing elements of NuDisco, House, Disco-Edits, Indie-Dance, Funk, Soulful & Jazz House. So, it’s no surprise that this guy with a preference for velvet jackets, fancy stuff and quirky japanese gadgets, already performed as support for Hercules & Love Affair, Dimitri From Paris, The Magician or G.I. Disco from Berlin.