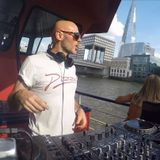 Never miss another
show from Santero

13:15 - Santero in the guest mix
by Bass & Breaks with Mike SwaineReposted

Santero has been rocking parties around the world for over 2 decades; everywhere from beach parties in Bali to basements in Berlin.

He has been finalist at the world's premier DJ competition, Red Bull 3style, and an official resident for the legendary Ministry of Sound, playing alongside artists such as Diplo, Armand Van Helden, Basement Jaxx, The Prodigy, Sugarhill Gang, Annie Mac, Jazzy Jeff, Grandmaster Flash, Ice-T and many more. He has played at the top of the Shard on 4 consecutive New Year’s Eves , a subway station in Lisbon, a treehouse (yes, a treehouse!) in Nairobi, and main stages at festivals like Secret Garden Party and GlobalGathering.

One of those rare DJ's able to turn his hand to almost any style and make it sound good, Santero is renowned for his versatility, inventiveness, deep musical knowledge and technical skills on the decks.