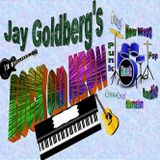 Never miss another
show from Rock on Neon Radio

Go to http://dtrconsulting.biz/rockonneon.html to get to the station's players and more. The station’s slogan is “some that you recognize, some that you've hardly even heard of” which is a quote from the song Celluloid Heroes by The Kinks written by Ray Davies. So music is played from artists played on mainstream and alternative radio; some well known, some not well known (this goes for the songs played by those artists as well), and from independent artists from around the world with whom many will be unfamiliar. Jay Goldberg, the station owner, teaches rock music history courses and he brings some of that information to his Rock on Neon Live show. So while the music is the star, his signature show, which is broadcast live on Saturday mornings from 10:00 AM to Noon EST, is about more that just the music. And the music dips a little into the 60's, and more from the 70's, 80's, 90's, 00's and 10's.