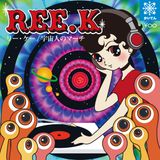 Never miss another
show from Ree.K

In terms of artistry, this lady knows no borders and is, in a positive sense un-catogorizable.
When DJ'ing or composing she treads her own terrain. She is Queen of her own un-touched planet styled from eclectic musical elements that she instinctively feels she can fuse into her own super-dimension.
An astoundingly beautiful electronic patchwork quilt of sound is Ree.K.

Chronologically, her resume reads...
music career begins in 1984,
active as a DJ from 1992,
her original party organization [Space Gathering] was set up in 1997
and an electronic music band [Kinocosmo] formed in 1998.
She released her own DJ mix CD [Cubism] in 2001 and started her own label in 2002 called [Hypnodisk].and released two mix CD [Alpha] and [Omega] in 2006,
Chillout mix CD "Quantum Leap" in 2015.
Her own 1995-1998 Goa Trance tracks compilation CD "Early Tracks 1" in 2019.
Ree K will never stop pushing herself further and deeper into the many dimensions of music.