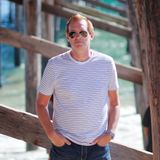 In 2006 I released "Happy Hour In The Gene Pool" my first downtempo album of original tracks under the name EVOLVE. The CD has been met with much critical acclaim and continues to be a best seller for its genre on both Amazon and iTunes. In November 2013 I released a second Evolve album "Deeper Than The Sea". The release features vocals by Bajka (Bonobo), Soul Sista Shakti (Mono Deluxe) and Margo Rey.

As a DJ I've been spinning downtempo chill and deep/tech/tribal house sets live in clubs, lounges and private parties and for five years was a resident DJ on the renowned chill-out destination BELOW ZERO, the coolest chill-out and downtempo radio show South of the North Pole!