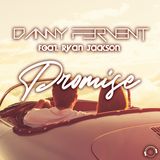 Danny Fervent is a Trance producer from Germany ! Even as a young boy he was extremely interested in electronic music . One day he got a cassette recorder as a gift, which resulted in his personal cassette collection ! At the end of 90's and around the beginning of the 2000's he played as DJ in many clubs .

Danny invested his whole pocket money in tapes and various compilations . He bought his first compilation in the late 90’s - it was a Dream Dance ! Growing up with this music his interest accelerated more and more . In the early 2000s he took the first steps in music production ! Years went by so that Danny could save his money for a computer and a keyboard as well as production software . He produced his first tracks all day and night so his skills in music production increased and kept growing !

In 2010 Danny Fervent got his first record deal and could release his first singles using a different alias . 2013 he accomplished his first milestone - a record deal with his greatest I