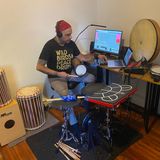 Sunken Cages is the moniker of Ravish Momin, an Indian-born drummer, percussionist, electronic music producer and educator. He has worked as a sideman with a diverse cast of musicians ranging from legendary saxophonist Kalaparusha Maurice McIntyre (of the Association for the Advancement of Creative Musicians, created in 1969) to pop-star Shakira. He led the acclaimed Global/Jazz/Electronic band 'Tarana' on international stages for 14 years and recorded several albums to critical acclaim. He currently leads the live electronic duo 'Turning Jewels Into Water' (on FPE Records) with Haitian percussion virtuoso Val Jeanty.