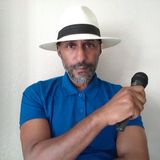 Never miss another
show from quamélove

Quamé Love aka DJ Superstar Quamallah was born in Brooklyn, N.Y., grew up in Fayetteville, N.C., finished high school in South Central Los Angeles, CA., and has been a resident of Oakland, CA. since the late 80’s. His passion for DJing began with the early influence of DJ pioneers such as Jam Master Jay and Jazzy Jeff. His overall passion is Black culture, which he has dedicated his life’s work as an educator to both researching and teaching. His list of notable experiences include: six underground Hiphop albums via ABB and Brick Records (as Superstar Quamallah), overseas tour as DJ for Souls of Mischief, published book entitled The Power of Letting Go: Discovering The Real You and Co-founder of the VéVé Clark Institute for Engaged Scholars in African American Studies at U.C. Berkeley where he recently retired as a lecturer/counselor. He currently dedicates a significant portion of his time raising his 8 year-old son and supporting his wife who is a dean at Chabot College.