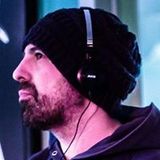 TOO DOPE
by Fabio SagariaReposted

Dj Pio,alias Pio Mazzaro, was born in Salerno (Italy) in 1975. He starts his early career as a dj in 1989 playing vinyl records. In 1996 he enters in the hip hop scene and with his friends Fabio Musta and Ogus set up and takes part in the crew DCP as a producer and a dj. Between 1996 and 2001, he produces mixtapes and demotapes for the DCP and the "DCP ep" pressed in 12" vinyl record. Since then he collaborates with many italian artists as Ghemon, Domey, Ramtzu, Mr Freccia, Tonico 70, Morfuco, Patto, L-Mare, Kajar, dj Side and many others travelling all over the country. In the early 2000s he was interested in rock and electronic music, these genres joined in his dj selections and remixes and extended his beckground in black music. Nowadays he plays, only in vinyl, funk, rhythm'n'blues, hiphop, rock and any other genre he likes.