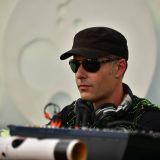 Helpless mix by Side Liner
by Cosmicleaf.gr

Nagamag.com Mixcloud Sessions #1 by Side Liner
by Nagamag.com [Music Blog]

Ellisdee is a Slovak psytrance dj and party promoter. Since 2003, he has originally been a string-art decorator on the Slovak and foreign scenes. His identity belongs to one of the oldest psytrance crew
of Slovakia - “Spectral Sound“, which was established by him and Gyrro, in 2002. After some time, this formation was completed by one other crew member – dj Elephant. In very beggining of its
existence, they started to organize parties, mostly near Nitra area. They decided to create an unique and unforgettable project of Slovak psytrance scene - “Mystika“ Festival. After six successfull years
of existence, the feelings are noticeable in its visitors even nowadays.
Ellisdee fills his repertoire mostly by progressive and dynamic psytrance, full of melodic elements. His sets are full of energy and harmonized balance. However, he can also enjoy the performances in chill out areas, where he plays mostly dancing psychill and chillgressive.