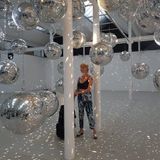 Dj Nat's passion for electronic music began in the early 90s in Geneva, where she started mixing and organising techno parties in tunnels, factories and squats. She spent her Saturday afternoons at the Mental Groove shop. Later, with five guys, she founded the drum & bass collective SUB6, which rocked Geneva nights for several years. Also in Geneva, she joined talented female artists with whom she organised illegal parties and streamed radio shows on the first Swiss internet radio station "basic". Supporting women in electronic music thus became her mission, which she continued when she moved to Zurich in 2002 and became actively involved in the collectives Scandal! and Les Belles de Nuit. She also played in the best clubs in Zurich and was resident DJ at the legendary club "Dachkantine".

Dj Nat's music is influenced by the 90s US and UK electronic sounds, but also by jazz, dub and African music and waves.