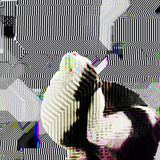 Never miss another
show from midilik

Patrick was initiated to music at an early age and classically trained on piano until the age of 13. He quickly branches out to the ECAL art school where he begins to explore Media & Interactive Design.
His broad experience in experimental music and video brought him into contact with the worlds of cinema, theatre, music and dance.
As he continued to develop his musical and visual experiments in parallel, he was offered a position as VJ and Lighting Director at a notorious club in Lausanne.

He has since collaborated with dance company Prototype Status on their projects Underground, Playground, Pôle, MIRE and as a VJ for the psychedelic band The Forks (Bad Bonn, Montreux Jazz, Kilbi, Reit Schule Bern), and also for Creaked Records nights (ZOO Geneva, Wanderlust Paris).

Now he work on two new projects for 2017-18, an audiovisual live act with his friend Isolated Lines called "SCHISM" and the other one as electronic music in a new rock band "MK ULTRA"