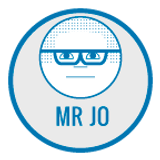 The first time Mr Jo blew a harmonica was in '95. He’s been into Brussels soundsystems since 2000, spicing up roots reggae, dub, breaks, d&b and dubstep with his bluesy feeling.
He plays in afro reggae band Jupiter & Ma Shi Faï. In February 2008, they went on tour through Senegal & The Gambia.
He frequently drops the sauce with Bunzer0 on the FOB show – Sub FM. The two fellas hit Belgian since 2006. They also collaborated with the Ranking records crew in Leeds and played at Reconstrvct NYC alongside Joe Nice.