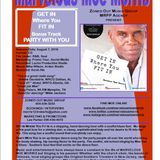 Bio
Music has been a constant in the life of MARVELOUS MOE MORRIS.

His connection to music started early. In fact, as early as 6, he tried his hand at song writing. Although his first penned song was not a hit, he continued exploring music in his hometown of Sandersville Georgia. He sang in the choir at Tennille Grove Baptist Church. Throughout high school he participated in the Glee Club; he was the marching band's drum major and student director; he played alto sax and was lead singer of the local group, The Soul Sensations.
When Morris served in the United State Marine Corps, he found a way to stay involved with music. While stationed in Okinawa Japan, he worked as a DJ at radio station KSBK and, of course, he found a way to sing by sitting in with various Japanese Bands.

After leaving Japan, he attended the National School of Radio and TV Broadcasting and Georgia State University to study Commercial Music and Recordings. His education pursuits unveiled plenty of opportuni