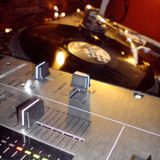 Never miss another
show from Mixless

Mixless by name... don't expect much proper 'mixing', it's all about the selection.

Too much great music gets overlooked - if I had more hours in the day you'd hear more of it. This is my attempt at putting a tiny dent in the unheard-music mountain.

First tapes, then CDRs, followed by the all-too-rare appearance behind the decks as one half of the Slack Dads, and now a monthly radio show on RFM, I've always loved sharing the tunes I love most - the mixes and shows you'll find here take it all in.

This one fades in...