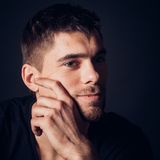 In 2008 worked in concert hall (with a capacity of 1500 people) as a soundengineer assistant. In the same year finished DJ school and trained skills in some places in Moscow (Newton Bar and the observation deck on Vorobyovi hills were among them) and on Cyprus.

Starting in 2011, has repeatedly went to the Europe Plus 107.3 fm Simferopol radio station broadcast with Tribal, Deep and Progressive House sets.