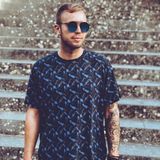 Be it for a never-ending string of his chart-topping productions and remixes, DJ-sets from Ministry of Sound to Carl Cox’s Revolution at Space Ibiza, Beatport endorsements (featured in “Ones To Watch” and “Hottest Tech-House Artists”) or his warm personality, Mike Vale does indeed stand out from the myriad of generic sounding peers. While his sound is hard to pigeonhole, Mike can’t hide the fact he comes from the environment that has always championed rougher, vanguard, alternative, techy sound, although British and American house culture predominantly influenced his taste in music. Equally proficient both in the studio and behind the decks Mike’s touring schedule has taken him across the globe to the U.S., Canada, all over Europe, Asia and of course his home turf in Eastern Europe.