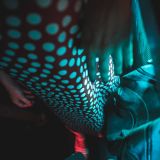 Love the Lovers, Play the Players by Mel Grace
by afrodeliaReposted

January's Radioshow 'A Taste Of Honey'
by Melina Theocharidou

November's RadioShow "A Taste Of Honey"
by Melina Theocharidou

Melina Theocharidou studied in Thessaloniki,graduating in Sound Engineering and Music Technology.
Worked as sound engineer in Hellenic Broadcasting Corporation in Athens(digitization part and sound editing for Radio) and also in International Documentary Festival in Thessaloniki(main technician for sound and film screening)
She has worked as a Dj in Budapest(instant artspace) and as a Sound designer for Greek independent team productions.
She took part in many music events in Thessaloniki,Athens and Greek cities.
Nowdays she lives in Athens and play her MeL-odies which contains a variety of styles.
a blend of Jazz,Funk,Library and some Blues&Soul classics wrapped in conjunction with the sounds of nowdays...