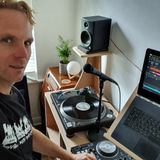 At the tender age of 12, Matt Slammer started mixing the early hardcore and jungle bought with pocket money from Birmingham's Don Cristie's record shop. A couple of years' too young to attend the early 90s raves, Slammer had to make do listening to the events' tape packs and trying to emulate his heroes on the 1s and 2s.

Slammer spun at clubs and parties around the UK throughout the 90s and early noughties, the highlight of which was doing the warm-up set for the legendary Slipmatt.

During a 10-year stint in Thailand, Slammer was a regular fixture at the capital's underground parties and ran a radio station which became notorious for its late-night unofficial old skool hardcore sets.

After returning to the UK, Slammer joined the Urban Warfare Crew, doing regular radio shows and events in London and Malta.

After nearly 3 decades on the wheels of steel, Slammer's unconditional love for anything with a breakbeat has never dwindled.