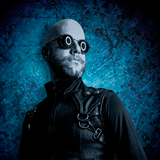 MATT HART is an industrial artist – both musician and DJ, from London, UK – involved & creating music starting with the violin at age 6, moving to the deeper viola a couple years later.... jump ahead a chunk of time & he found himself writing & releasing his own music under the same name, MATT HART and also held the honour as a resident DJ at the London club Departure a springboard to other great London clubs like Slimelight, AntiChrist, plus Nocturne (Toronto) Revolution (Sheffield) Deliverance (Edinburgh) Delete Yourself (Manchester) Infest Festival (Bradford) with the highlight of opening & closing sets of the final night of Aftermath Festival (Toronto) alongside sets by Rhys Fulber and Joe Letz.

Under his own heavy industrial live project, MATT HART (since 2017) he has supported well known industrial/EBM acts, while consistently releasing music which may well find their way into his DJ sets too!