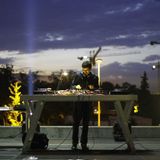 Never miss another
show from marmat

DJ Marmat, art director of Sicko Disko, a night that was founded 10 years ago, has been active on the scene for 15 years. From the very beginnings he stayed true to his sound which is a combination of various electronic, and now even other music styles. This diversity in sound brought him to DJ booths of almost every Croatian city, but also appearances at the famous EXIT festival 2008/2011. He also DJed at the Garden fest x4, Stop Making Sense , Soundwave, Hartera x2 (SMD, Erol Alkan, Zabiela, Royksopp, Leftfield among others), Sirup, Atlantis and also made visits to London, Budapest, Ljubljana, Belgrade, Vienna, Stuttgart and toured India (Bombay,..). His style is a mixture of electrodiscohouseindie sounds. Also Radio808 online SickoDisko radioshow host.
Besides from mentioned guests were Thieves like us, Juan MacLean (DFA/K7!), Vicarious Bliss (Ed Banger), Radioclit..) and a lot more from the region. >>>marmat001@gmail.com