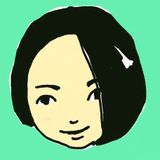 Mari* is a Senior Producer at Worldwide FM and Gilles Peterson’s longtime radio collaborator.
She presents a daily breakfast show and the monthly ‘Oto Nova Japan’, where she introduces a new wave of artists and music coming out of Japan.
Mari* has lived and worked in the US, Japan and the UK and has produced and coordinated radio shows with more than 30 radio stations around the world- from major radio stations in Japan to the BBC. She also writes on publications and works as a translator.