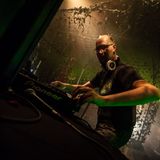 Le Petit T€Pi has been strongly influenced by all the different layers of electronic music that have been the driving force in his life since the 80's. He is a resident DJ and the founder of electronic dance music promoting organization called VOEMA. He has also been a co-organizer in such clubs as Jytke and the late 21 Steps Club, doing DJing and VJing in the process. All the time expanding the range of music styles to play in his sets, not settling for simple one genre solution, but broadening the scale, being versatile and adaptable. Besides doing club gigs and performing on several festivals in Finland, Le Petit T€Pi has played DJ sets on Baltic Sea cruise lines and has been performing internationally in Israel and Vietnam (eg. Lush, Shadow, Vasco's / HCMC).
Although being capable of handling a broad spectrum in styles, Le Petit T€Pi is now focusing on dubstep induced, (nu skool) breaks and elektro sets, combining the best of those worlds.