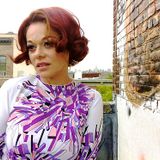 I started the band Deee-lite w/ Dj Dmitry , named the band & prod. co. "Sampladelic" in 1986 when I found 500$ in the back of a cab & bought my first sampler (AKAI S900)allowing me to write music from other music.I wrote all lyrics,melodies, art direction) We shared the desire to perform LIVE. Together we built the house of Deee-lite & then tore it down. After 3 LPs ,I quit in '94 & have been writing & prodcng ever since but stash my joints, only play them @ LIVE performances until bus.is in order. it took 9 years to be released from Warner bro. rackets & so decided to DJ until the industry could find stable ground. My new releases should start hitting the public asap. I was the opening nite dj for Horsemeat Disco ,played Berghain nye 2012,VanDamn,residency@ Chicago's Berlin,& 1000s of clubs worldwide
bookings since 1997 : ladykier@mac.com
http://theladymisskier.tumblr.com www.ladykier.com
https://www.facebook.com/pages/miss-Lady-Kier/296808489716?sk=wall