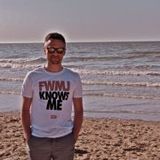 A young veteran in the game, krewcial released solo albums on PlayItAgainSam and UK’s BBE in the early 2000’s. With longtime friend Lefto, he sampled jazz’s greats for a beatdriven album on the legendary Blue Note label. Nowadays, he releases his soulful uptempo tunes on various labels such as Lumberjacks In Hell, We Play House, Mysterious Works, Midnight Riot and GAMM.

His DJ-sets reflect his broad musical tastes : centered around disco and house and adding touches of latin, funk, boogie, hiphop classics and afrobeat anthems into the mix. As long as it’s soulful and keeps the dancefloor in motion, there’s a chance he’ll play it.