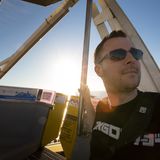 Kirk Chantraine is a Canadian photographer, photo editor, DJ and software developer currently based in Vancouver, British Columbia. He graduated from Vancouver Film School for 3D Animation in 2004 and has been working in the Visual Effects industry ever since with companies such as Electronic Arts and Disney.

Kirk retired from DJing clubs in the mid 2000s and over the last few years Kirk has exhibited his photographic works in San Francisco and Vancouver. He continues to shoot live music and performance across North America for The Snipe News while also shooting landscape and portraiture.