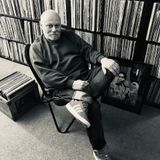 Since his early pirate radio days and club sets in the mid 1980s Kev Beadle has always pushed the musical boundaries choosing from a spectrum rooted in jazz and soul.
People who have witnessed any of his numerous DJ sets around the world as well as guest slots at various legendary nights and events including Dingwalls, The Wag, The Fez, Special Branch. Suncebeat and many Southport Weekenders will know to expect to be both entertained and educated by his selections.
Mind Fluid is a show which reflects Kev's vast experience as a DJ and record collector, as well as curating compilations for Blue Note Records, Cadet, Clean Up and more recently BBE, playing music from around the world, blending the obscure with the known as well as fresh new talent with the established.
Mind Fluid is a show for a 21st century open minded and inter-connected world where music is a rich blend for people who live for the beat..