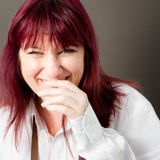 Never miss another
show from kerryherbert

Gossip, gags and gig listings from the Brighton and UK comedy scene.

Kerry Herbert is the co-promoter of the longest running comedy fundraiser in the South-East, Charity Chuckle. Over four years, Charity Chuckle has raised nearly £10,000 for the local community and has played host to headliners such as Robin Ince, Josh Widdicombe and Lucy Porter; it's a laugh with the feelgood factor!

Charity Chuckle is usually on the second Tuesday of each month at Brighton's award-winning venue, the Komedia. Find out who's on at Charity Chuckle here: www.charitychuckle.co.uk.