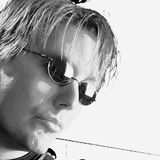 I was the founding member, songwriter for, and co-producer of The Trend. We were active from 1979 through the mid '80's; Other stuff? Wrote, produced, and performed U.S. Pizza Company Jingle, and some radio ID's in 1988. Recorded as solo act for Del-Fi, Big Deal, Not Lame, Kicktone, and Futureman Records. Co-produced recordings with Don Smith, Mike Lawler, and Lewis Martinee in Memphis, Nashville, and Miami, respectively. I am currently practicing law; hosting Alt Universe Top 40, which is aired on the Shortwave band each week in Europe on Channel 292 (6.070 MHZ and 9.670 MHz) and on WRMI (9.455 MHz and 9.395 MHz) in North America; and diligently remixing and mastering a large number of my synthesizer-based compositions and solo recordings from the '80's and '90's.