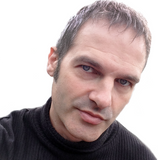 Rock/Metal/Indie/Alt DJ since 1994 - Had my 15 minutes of fame in 2009 when I started the Rage Against The Machine v X Factor chart campaign. It went to No.1 breaking a Guinness Record along the way, winning me a Metal Hammer Award, and changing the game for me. I also worked on the 2012 Christmas No.1 too plus lucky enough to get to work on campaigns for The Rolling Stones, Nirvana's 'Nevermind' re-release, and Rod Stewart to name a few.

Simon Cowell offered me a job. I turned it down.