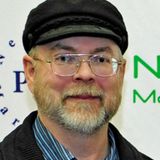 I was born in the great wet city of Vancouver BC, Canada. I was brought to Sunday school at the local Gospel Hall by one of my little 5 year old friends. We would go together down the street to the local Hall. Later when we had moved to Tsawwassen another friend dragged me to the local Anglican Church where I became a altar server. It was here at the age of 13 I was baptized and confirmed. I went off to University at Notre Dame in Nelson BC as it was a small University. I earned my BSc here.I wend to seminary and became an Anglican Priest in 1987. I served a number of congregations in Alberta as well as one Lutheran Congregation. I was also the Chaplain at HMCS Tecumseh, Naval Reserve for 21 years and enlisted for 41 yrs. I served all over Canada a a Military Chaplain including, 15 Wing Moose Jaw, CFS Alert, CFB Halifax, and in Victoria. I became a Catholic Priest (married) in 2012. I have not been assigned a congregation. I wonder about preaching here and there.