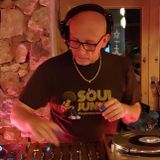 Joan Ribas was born in Ibiza in 1.963. With 15 years old he began to collaborate with the unique radio station in the island. His first works as a dj were in diverse bars of the zone of the Port and Calle de la Virgen of Ibiza, mythical places as the Be Bop, Akelarre, Bar 22, Number 1, etc, etc, etc, very young began to be employed at a specializing shop of vinyl that was in Ibiza downtown very near to the port, it was called Flip Music and it was the first one in bringing exclusive import vinyl for djs in the island. At the age of 18 Pacha Ibiza comes to look for him. He was playin at Pacha as a resident for almost 20 years, sharing dj booth with people as Dj Pippi. Alfredo, Cesar de Melero o Angelito among others including hundreds of the best djs of the
world.
WINNER OF A SPANISH DJ MAG AWARD 2008 & 2010
RESIDENT AT PACHA HOTEL IBIZA