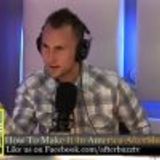 Content Provider. Co-Host of the online podcast www.ERNIEandJESSE.com, Jesse has taken the show from its grassroots startup to its 3rd Season. Building a strong fan base along the way, he has helped create audio, graphics, and other viral media for the podcast.

Audio Producer. In late 2010 Jesse founded www.NEONLIGHTSHOW.com a website dedicated to the Electronic Dance Music (EDM) scene. Connecting with DJs in the industry, he has produced multiple drops and sweepers for DJs and other radio hosts.

Video Editor // Graphic Designer. As a freelance video editor Jesse has contributed Promo videos for a wide range of clients from Corporate to Bloggers.

Social Media Strategist. Mr. Daniels has a strong passion for online promotion and stresses that aspect in all the projects he