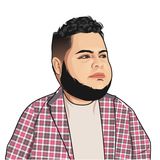 Classy, unique, and "flashy" are just a few adjectives used to describe DJ Flashback. A Santa Barbara native and the son of a fellow 80s disco DJ, Flashback has emerged with a musical passion which has been shown since his early childhood, where he would carry around CDs and tapes to family parties. After a few years of mixing, he was invited to become a part of "DaQube Radio", an online radio station based out of Bakersfield, California, and within a few months, began at Santa Maria's Newest Old School Station, MEGA 97.1 (KRTO) and Bakersfield Premier Old School Station, GROOVE 99.3 FM.Although Flashback's radio shows differ from his actual strongpoint, he feels he should show his audience how he can cater to all genres available. His DJ influences vary from the late Tony B, Arnulfo Valles to Bad Boy Bill and Richard Vission. "I always feel I can learn something new from everyone, which helps me improve my mixing and in turn can also make me a better person."