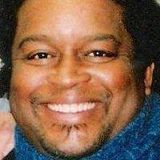 Behind The Hits with Motown songwriter Pam Sawyer
by GoldsoulReposted

(February 22, 2018)
He hails from the Windy City, Chicago, Illinois....but he always
carried a quiet fire in his heart to keep him warm and
satisfied....His Music.

He had a fire and determination to escape the tough streets of the
South Side of Chicago to establish an international status in the Wide
World of Music.

He is a multi-instrumentalist, learning to play drums at age 5, bass
guitar at 7, keyboards at 9, and so on until he had mastered playing
over 10 different instruments.

He is a successful songwriter, having penned over 1200 different
compositions and played everywhere from radio & records to television
and beyond.

He is a producer, arranger and orchestrator, a musical director who's
worked with and shared the stage with everyone from Billy Paul, The
Ebonys, The Stylistics, The Delfonics, Harold Melvin & The Blue Notes,
Patti LaBelle, and CINTRON to Grammy Award Winners Jon Secada, Stanley
Clarke.